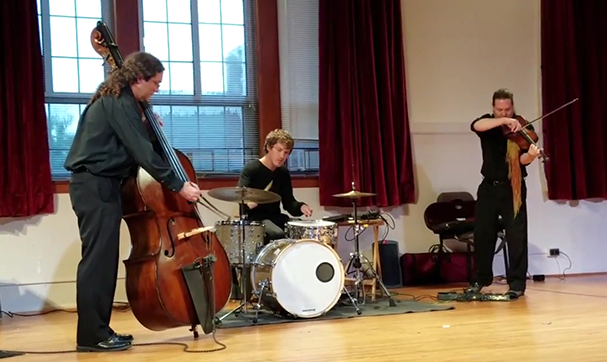 PRETORIA FIELDS | 2-4 P.M.
THESE EVENTS ARE FREE AND OPEN TO THE PUBLIC. "The Paul Mercer Trio" with Paul Mercer, Gabriel Monticello and Paul Stevens. Paul Mercer is a violinist and composer whose work focuses on the whispering in the wood of ancient violins and violas, and their hidden melodies. He is best known for his work with "The Changlings", The Ghosts Project", and Jill Tracy. Paul is joined by Albany Symphony Principal bass, Gabriel Monticello and percussionist, Paul Stevens. Read more about each artist below:

PAUL MERCER
Paul began studying the violin at age eight and started writing music almost immediately. Developing his unique improvisational approach to the violin from street performing and forays into different genres and styles, he joined the neoclassical pop quintet The Changelings at their inception in 1994, going on to produce six critically acclaimed albums with them.In recent years he has toured and/or recorded with Jill Tracy, Zoe Keating, Brass Knuckle Surfer and Faith And The Muse at venues all over the world.

GABRIEL MONTICELLO
Gabriel Monticello’s music career is a diverse blend of many genres and styles. Gabriel is one of the top freelance classical musicians in the Southeast and aside from serving as the Principal bass for the Albany Symphony, he frequently performs in the Savannah Philharmonic, Valdosta Symphony, LaGrange Symphony, Columbus Symphony and many others in the region. Gabriel has frequently performed with the art duo The Ghosts Project, and has had the honor of performing with artists such as 2cellos, Kristen Chenoweth, Amy Grant, Michael W. Smith, Sarah McLachlan, Chris Tomlin, The Nathaniel Johnstone Band, Walfredo Reyes Jr, and János Starker.

PAUL STEVENS
Since the technical definition of a percussion instrument is anything one beats with a stick, Paul Stevens has been playing since the day his younger brother was born. Although he has a solid grounding in classical music, he remains versatile, moving fluidly between jazz, electronic, rock, and contemporary styles. He has given concerts in Europe, South America, and throughout the United States, and his works as a composer have been performed in Spain and Israel. His current projects include bands Grand Vapids and Moloq, corporate keynote ROC Ensemble, and music for modern dance.