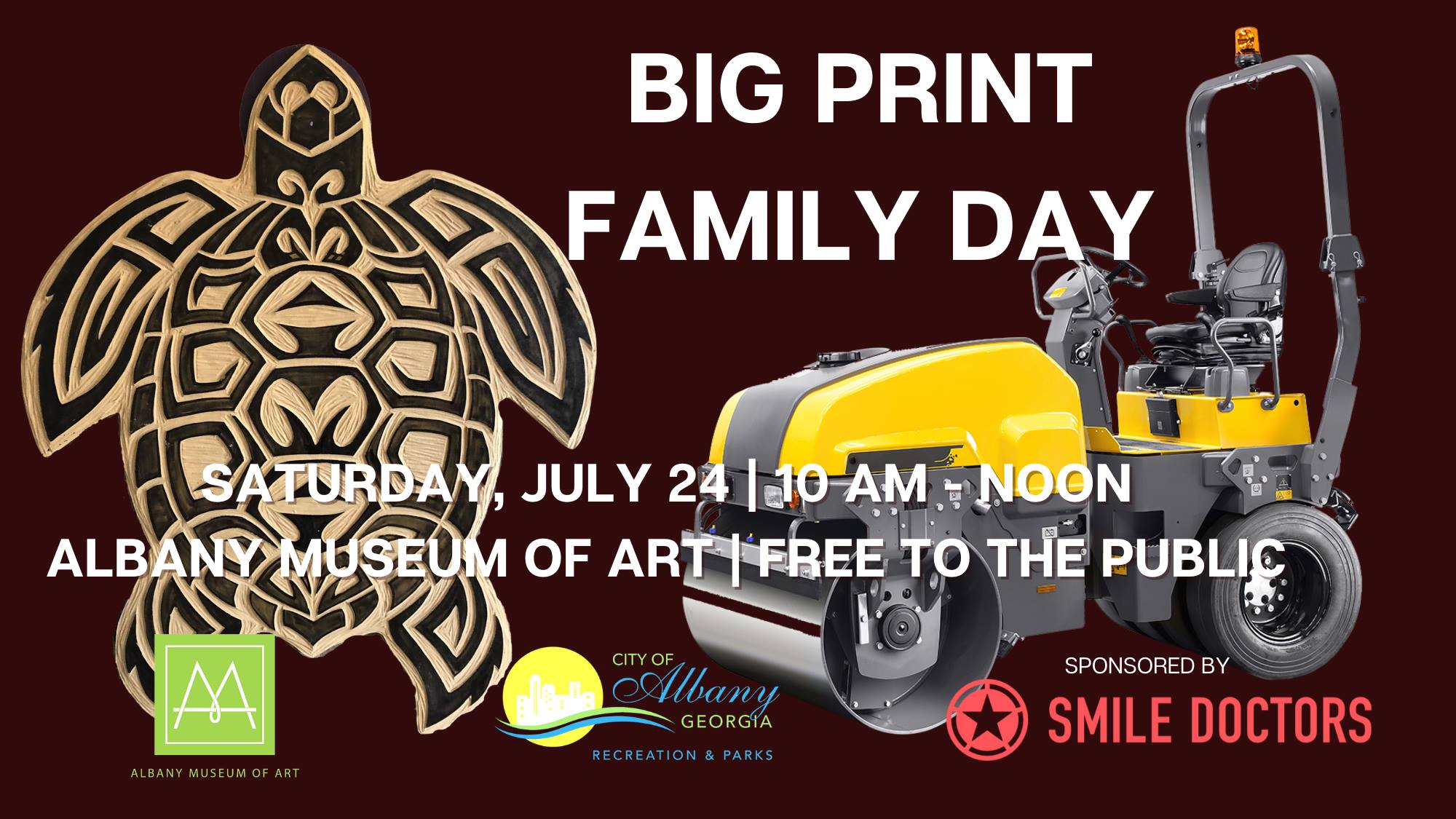 Family Day will steamroll its way back at the Albany Museum of Art on Saturday, July 24 with a bigger-than-life printmaking experience.

Sponsored by Smile Doctors and conducted in partnership with the Albany Recreation & Parks Department, Big Print Family Day is a free event that will feature Andrew College Associate Professor of Art Chris Johnson and his students using a steamroller to print images using a 3-foot-by-4-foot woodblock of a turtle.

After being on hiatus for a year because of the COVID pandemic and then delayed from April because of inclement weather, Annie Vanoteghem, AMA director of education and public programming, said she is excited that Family Day, which is usually conducted twice a year, is making its return.

“It will be 10 am until noon, and we’re hoping for a large turnout,” Vanoteghem said. “You can find examples of artists using steamrollers to create large prints on the internet, but nothing will be like watching this exciting printmaking process in action.”

While only Johnson and his students will man the steamroller in the AMA parking area, families will be able to watch the printmaking from a safe distance. There also will be family-friendly activities for kids. At the Recreation & Parks tent, kids will be able to paint a piggy bank or unicorn bank that they can take home.

Johnson, a printmaker and a muralist, has been creating and exhibiting large-scale work such as murals, wood carvings and prints since 2006. “It’s going to go so well with Family Day,” he said. “There will be stuff kids can do.”

“We’ll also have a scavenger hunt inside the museum,” Vanoteghem said. “After the Family Day event, no one has to hurry home. We’re open until 5 pm, so families can enjoy the exhibitions together and visit the AMAzing Space children’s area.”

Johnson has experience creating large prints and using a steamroller as a press. “This is probably my fifth event,” he said. “I did a lot of large-scale wood carvings in grad school and I also taught in grad school, so part of my relief printmaking class was making a large steamroller print.”

He said printmaking is “caveman-style art. It’s carving wood, hitting it with pressure and making a bunch of prints of it. Even with lithography, you’re drawing on rocks.”

Johnson also plans to have some smaller woodblocks carved with floral, mushroom and snail designs that will be used to print t-shirts using the steamroller. “It makes it a little more special for Family Day,” he said. “They can help ink their block, and it’s not a massive block. It’s cool. You can look at the shirt and say, ‘That was made with this process.’ It connects the dots for some people.”

He said he will have students and others assisting in the process, which requires several people. “It’s exciting,” he said. “Some of my students said, ‘That’s awesome!’ It’s heavy-duty artmaking, not delicate like canvases are.”

Johnson recently exhibited his mural work, a 25-foot-wide Albany “postcard” that highlighted the community’s roots in the river system and its history, in the AMA’s On the Wall exhibition. He also created the large murals at Lincoln Elementary Magnet School in Albany, a project that was funded by a grant the AMA received from the Georgia Council for the Arts.

Big Print Family Day was originally scheduled for April, but was postponed because severe thunderstorms were expected that day.