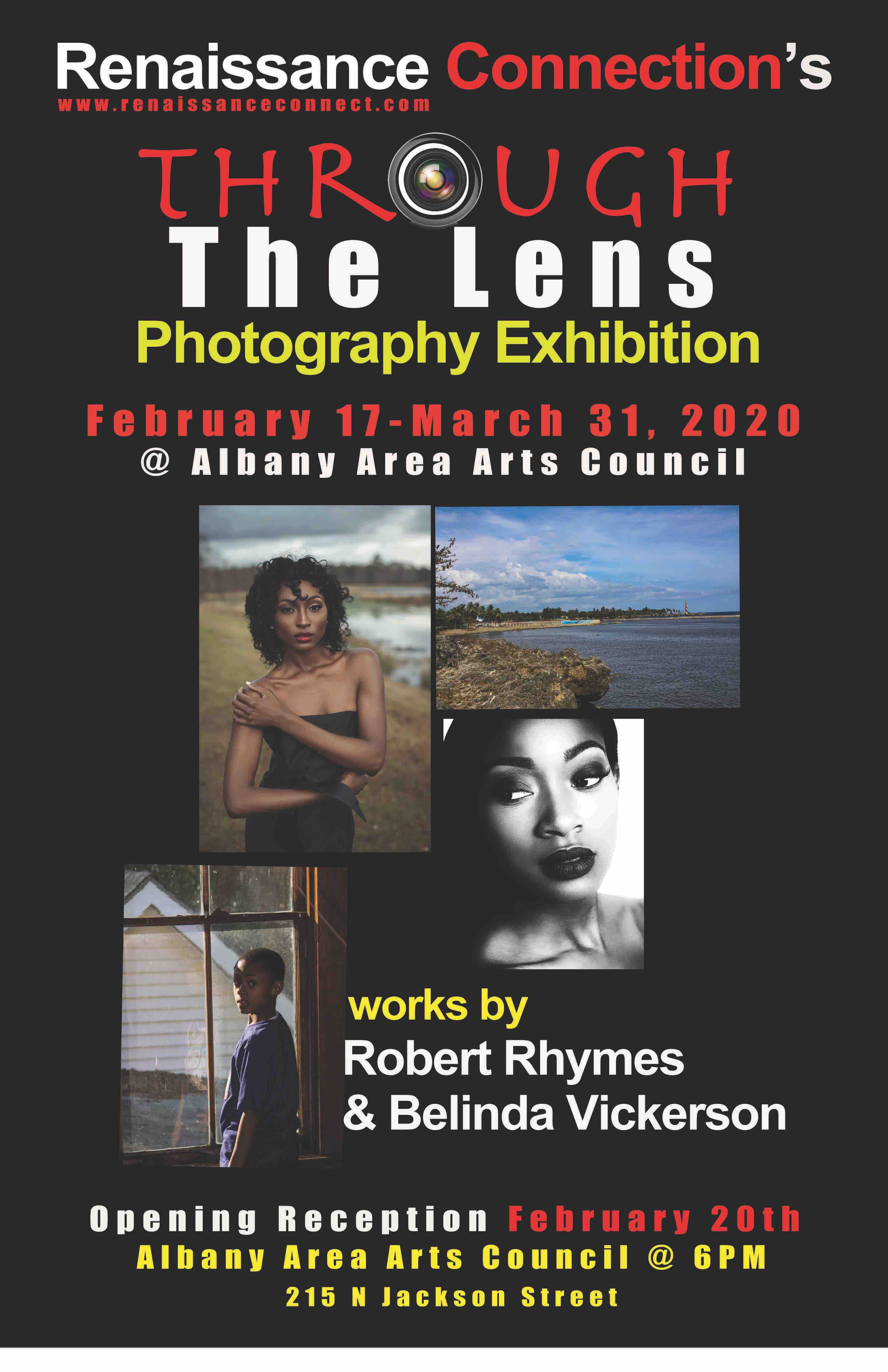 Renaissance Connection, Inc. presents “Through the Lens” Photography Exhibition. The exhibit will feature photographers Robert Rhymes and Belinda Vickerson. The exhibit dates are February 17-March 31, 2020 at the Albany Area Arts Council with gallery hours of 12:00pm-4:00pm on Mondays-Wednesdays and 12:00pm-8:00pm on Thursdays. The Artists’ Opening reception will be Feb. 20, 2020 @ 6pm. This will be an opportunity to meet the artists and see beautiful artwork. The “Through the Lens” exhibit is organized by Renaissance Connection, Inc., an arts & cultural non-profit organization dedicated to supporting creativity through all forms of art for the educational advancement of the community. For more information about the exhibit, visit www.renaissanceconnect.com or call Femi Anderson @ 229-436-0802 or 229-869-3380. Go > 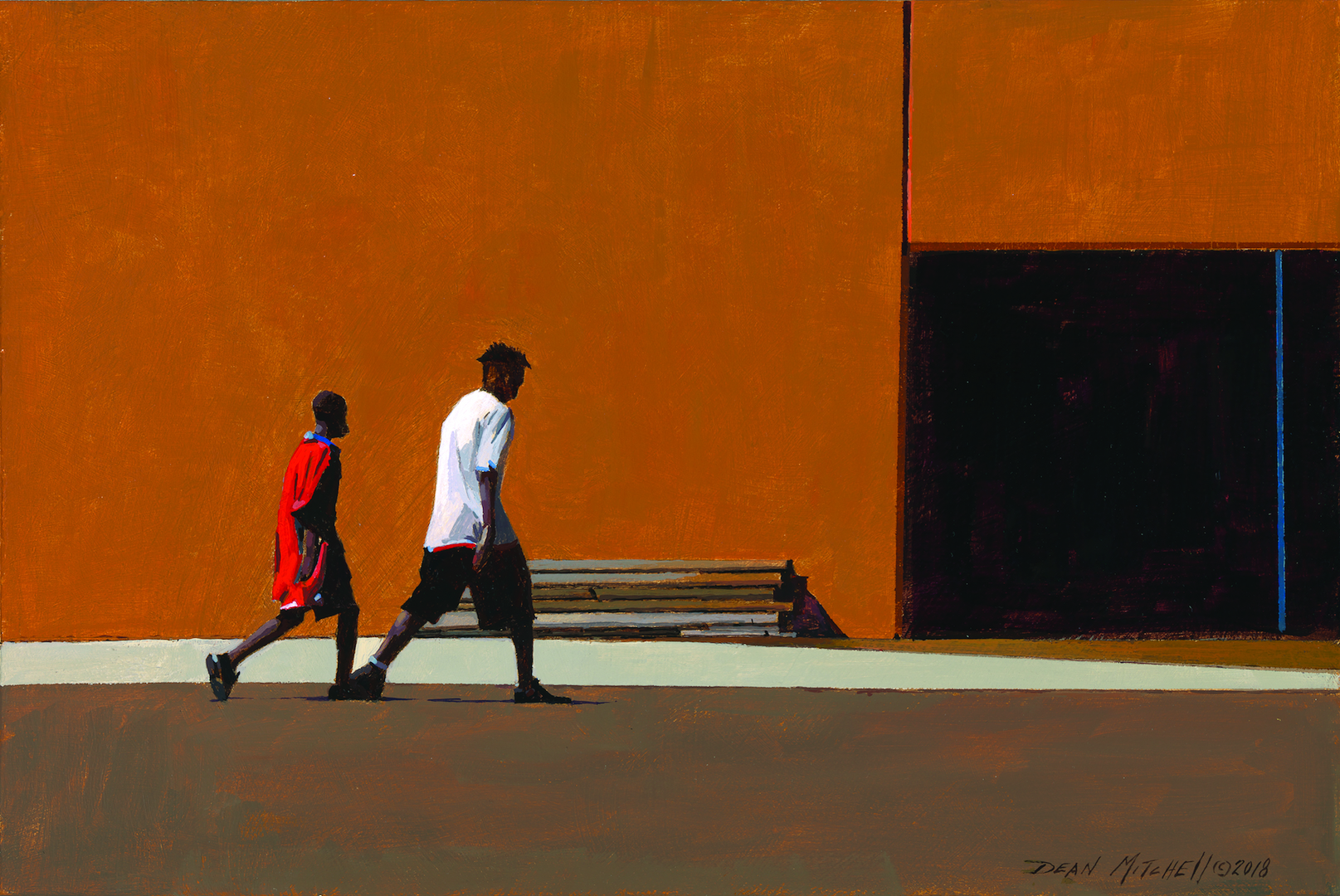 Looking at America and Painting What I Want, How I want and How I See It

Don't miss the AMA's new exhibit: Looking at America and Painting What I Want, How I want and How I See It: Works by Dean Mitchell. This exhibit will be open from January 9th-March 28th. Go > 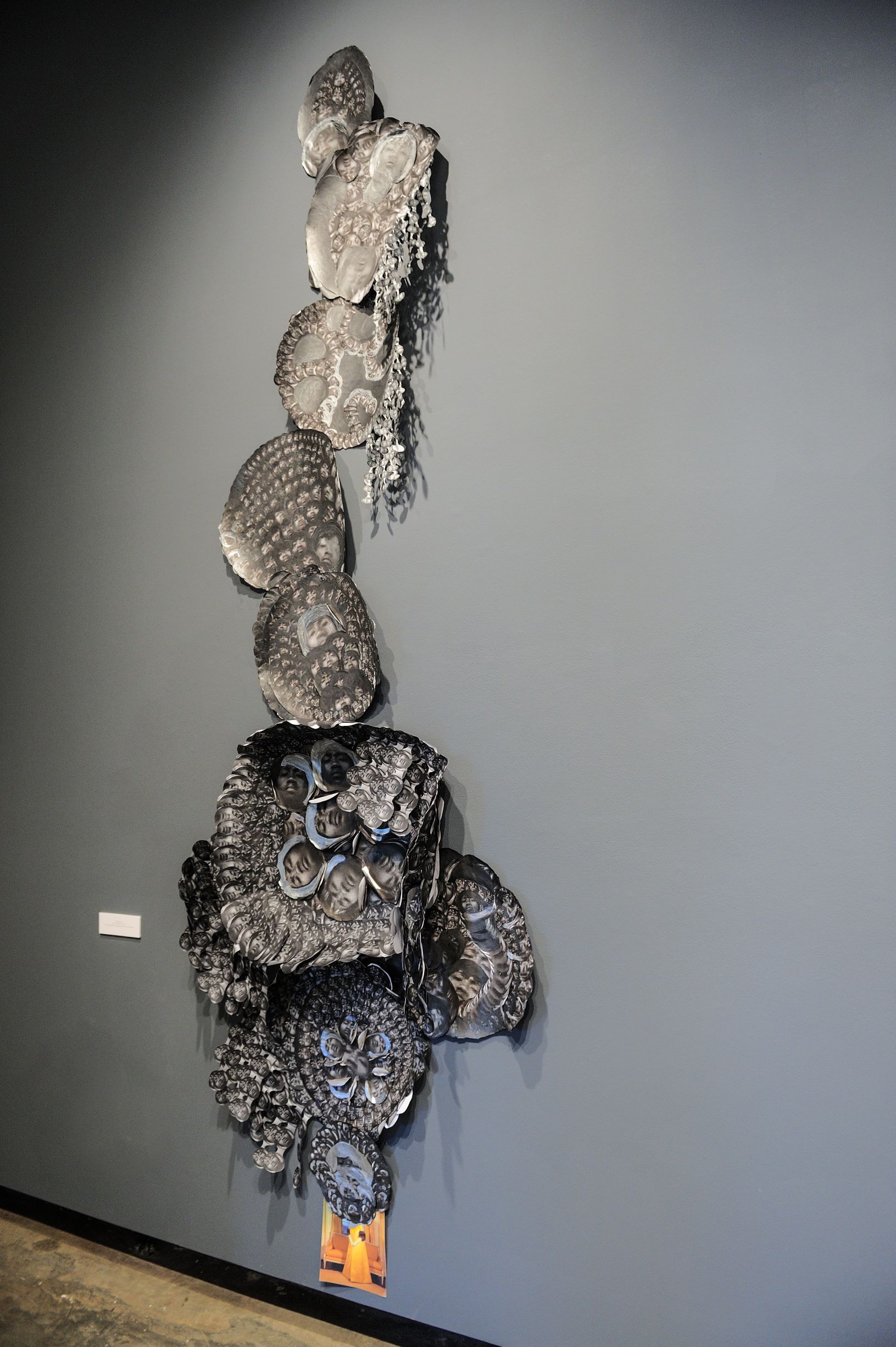 Do Not Hand Me Over to the Impure Whiteness of Noon: A Hemings Elegy

Don't miss the AMA's new exhibit, Do Not Hand Me Over to the Impure Whiteness of Noon: A Hemings Elegy: Works by Yanique Norman. This exhibit will be open from January 9-March 28. Go > 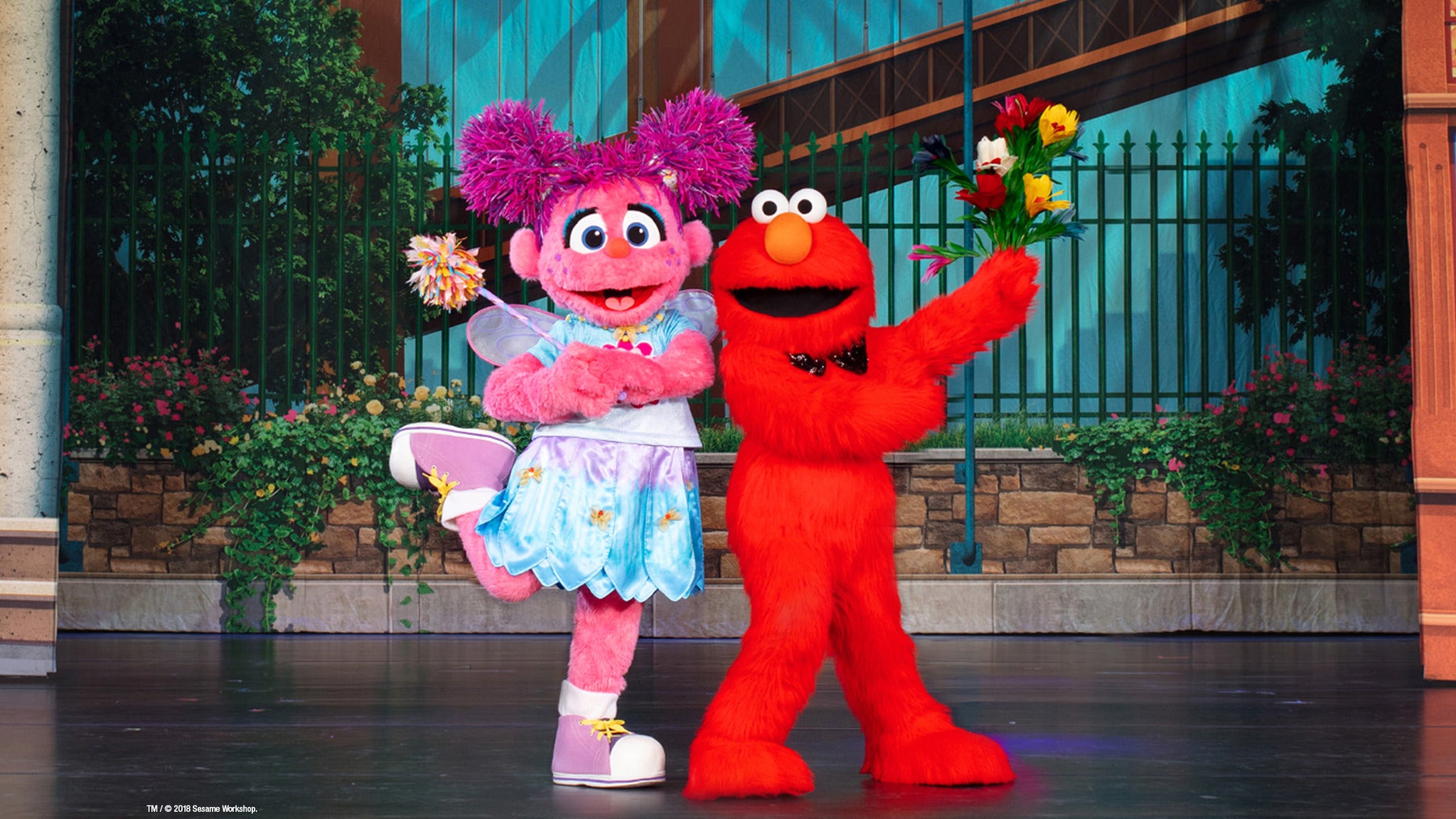 When magician extraordinaire Justin visits Sesame Street to put on a magic show for the whole neighborhood, Elmo wants to be part of the big event. But there is one problem. Elmo does not know how to do magic! Thats when Elmo teams up with Abby and Justin, embarking on an amazing journey where Elmo will discover the power of yet the lesson that with perseverance and practice, nothing can stand between you and your dream. Along the way, Elmo and Abby, joined by their friends Cookie Monster, Big Bird, Grover, Rosita, Count von Count, and Gonger, discover the many magical moments in everyday life. In the end, Elmo learns that you can do anything you set your mind to if you just keep trying! Join your favorite Sesame Street friends on this magical adventure when Sesame Street Live! Make Your Magic comes to your neighborhood *Note: Costumes not permitted for guests 14 years & older. Go > 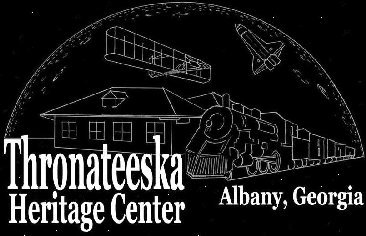 The Wetherbee Planetarium is proud to be considered a valuable educational resource in South Georgia, sharing not just fulldome educational films, but also producing live presentations on a wide variety of astronomy topics. Go > 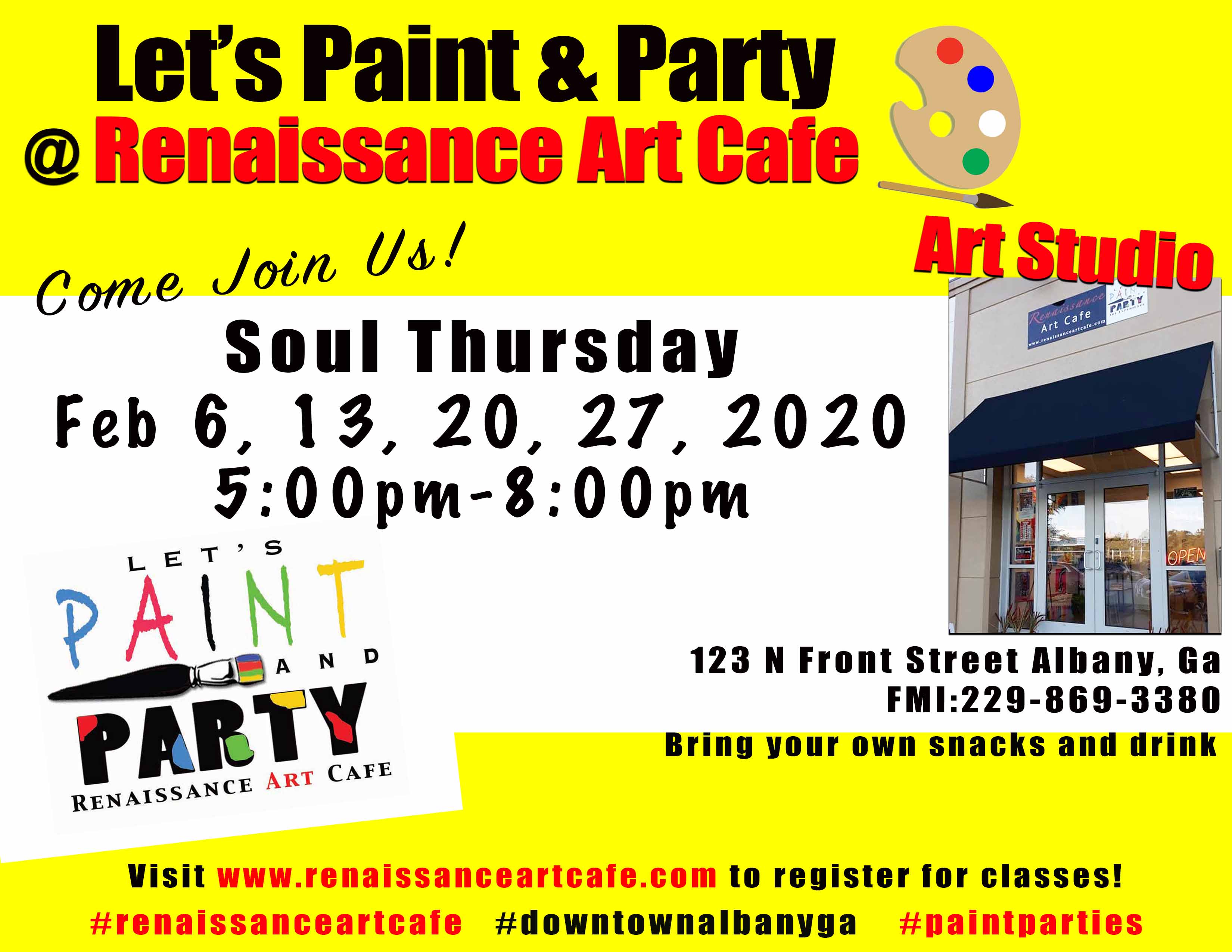 Let's Paint and Party at Renaissance Art Cafe! The event is Soul Thursday from 5-8:00PM. $25 per adult, they provide step-by-step instructions & art supplies, you bring your favorite snacks and drinks! RAC is located at 123 N Front Street. Call 229-869-3380 to register. Go > 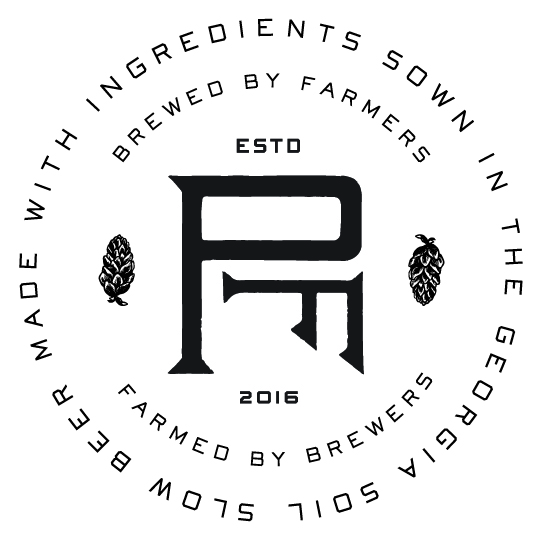 Come out and play with Geeks Who Drink and grab your favorite favorite pint of beer made from ingredients grown in South Georgia soil! Go > 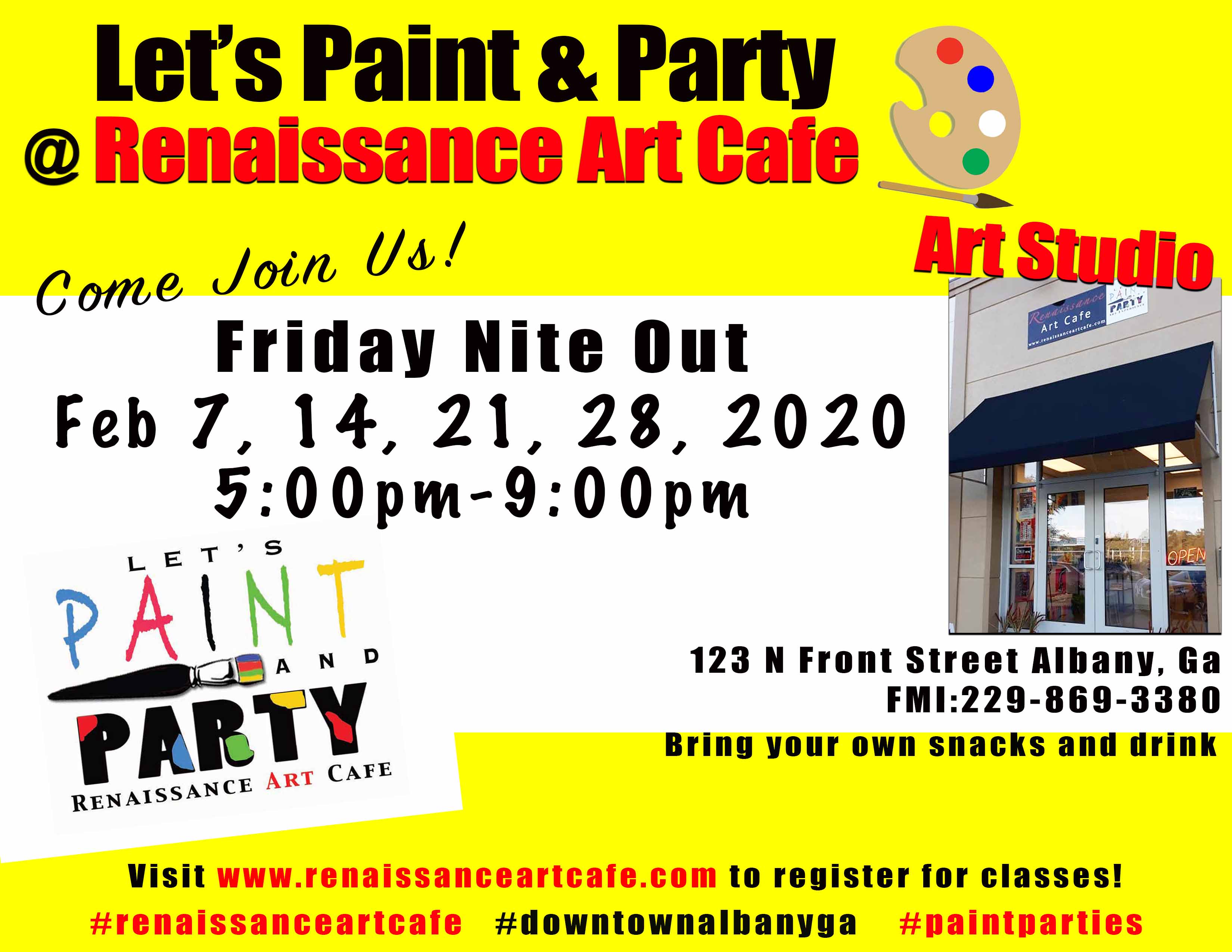 Let's Paint and Party at Renaissance Art Cafe! The event is Friday Nite Out from 5-9PM. $25 per adult, they provide step-by-step instructions & art supplies, you bring your favorite snacks and drinks! RAC is located at 123 N Front Street. Call 229-869-3380 to register. Go > 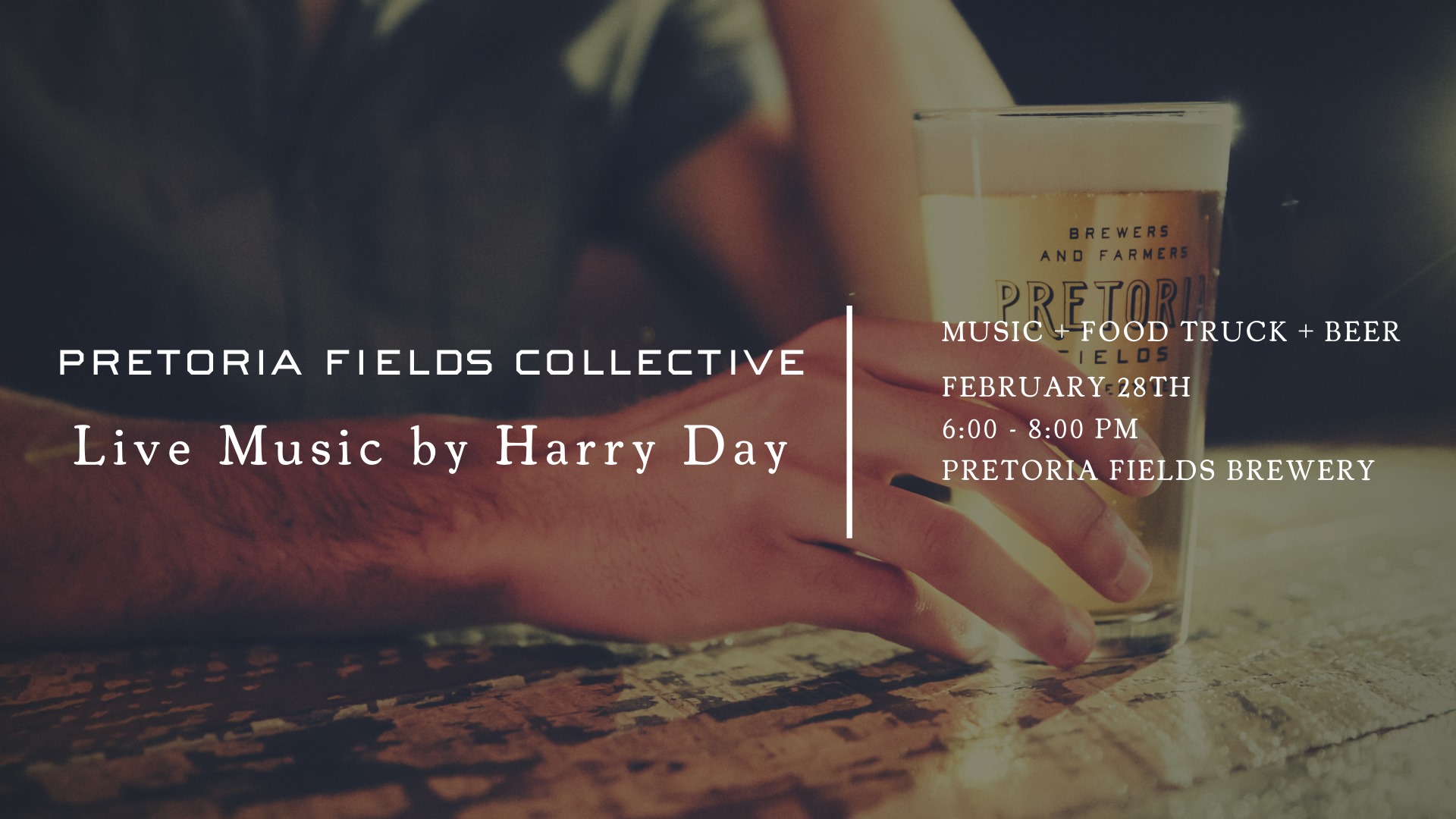 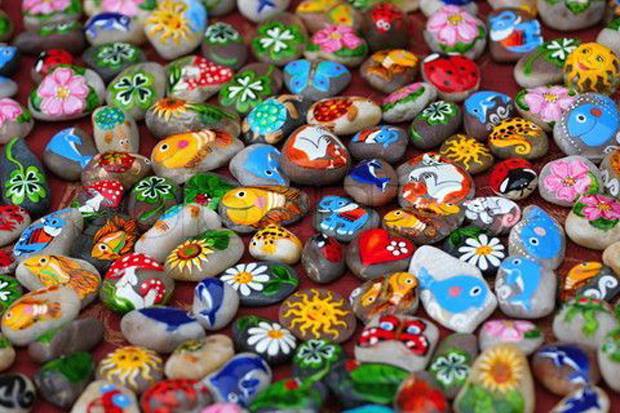 Yoga in the Park

Join Albany Yoga Project, a Baptiste Power Yoga Affiliate, at 10 AM for Yoga in the Park! Yoga Ambassadors will lead participants in a free yoga class at Tift Park Community Market. All ages are welcomed! Please bring your own mat & water, and we will see you on your mat! Go > 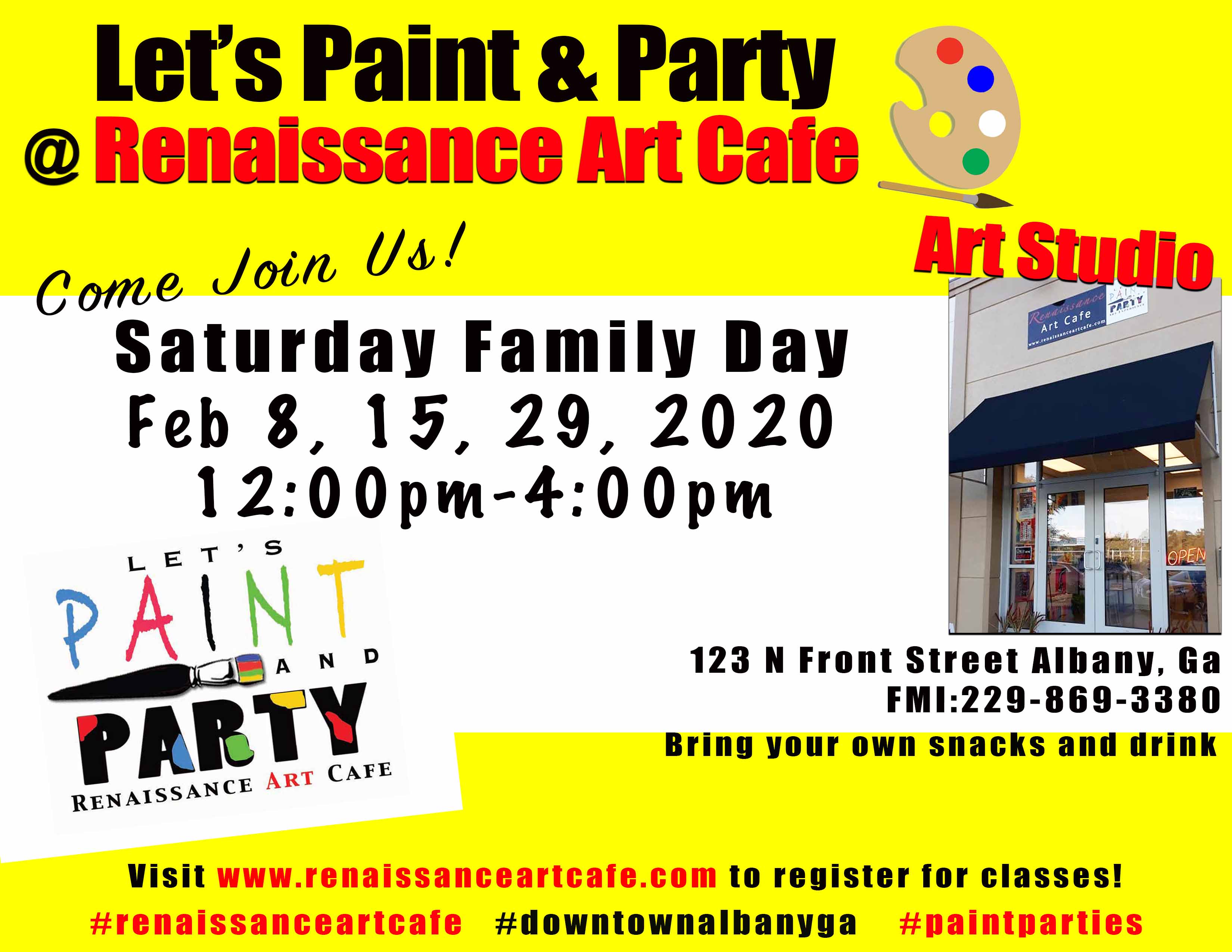 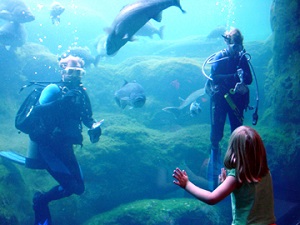 Dive Shows take place at the Blue Hole viewing window and are included with general admission. This event is weather permitting. Go > 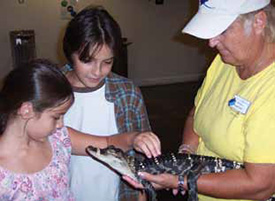 Animal Encounters take place throughout the aquarium on the weekend, but are normally scheduled for Saturday and Sunday at 3:30 p.m. in Skywater. Go > 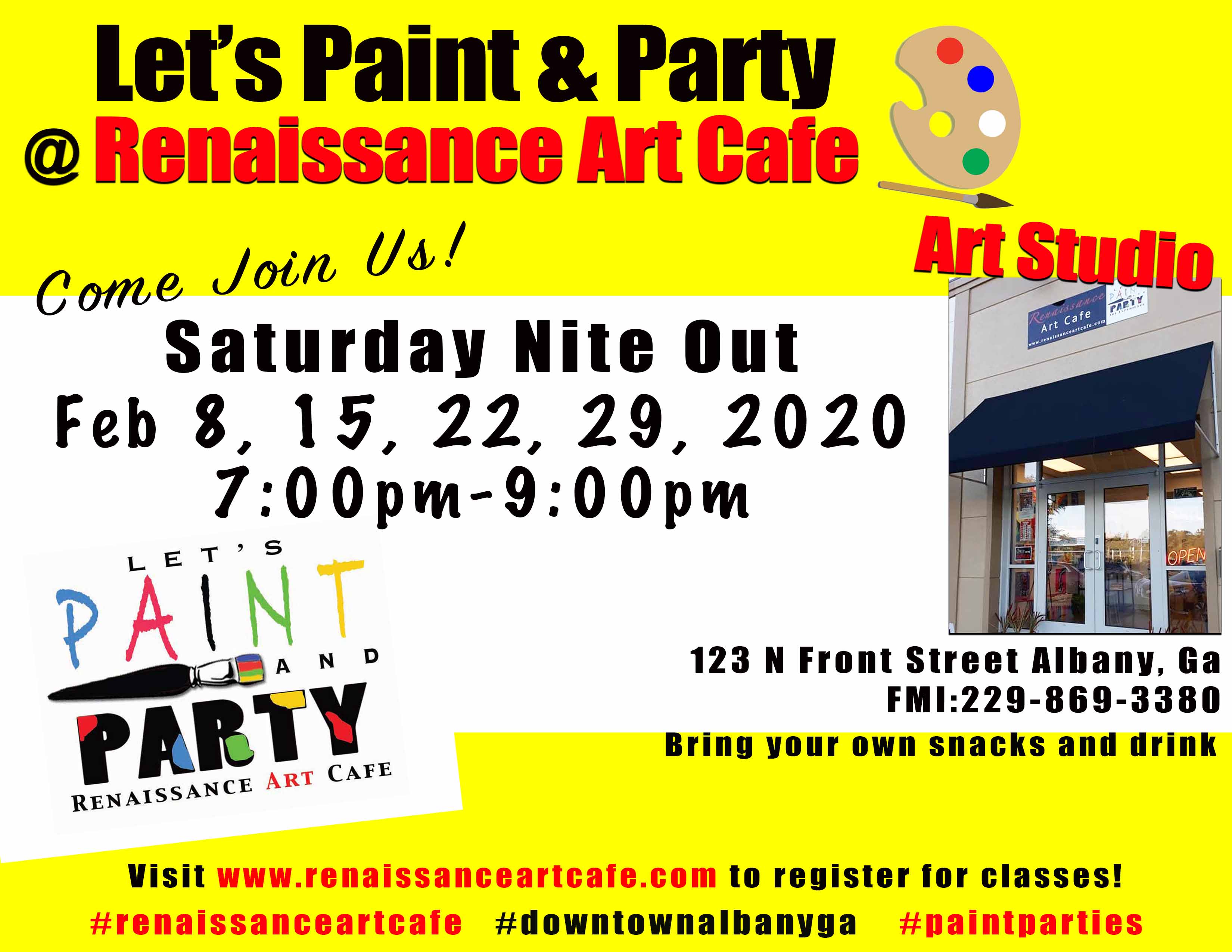 Let's Paint and Party at Renaissance Art Cafe! The event is Saturday Paint Nite from 7-9:00PM. $25 per adult, they provide step-by-step instructions & art supplies, you bring your favorite snacks and drinks! RAC is located at 123 N Front Street. Call 229-869-3380 to register. Go > 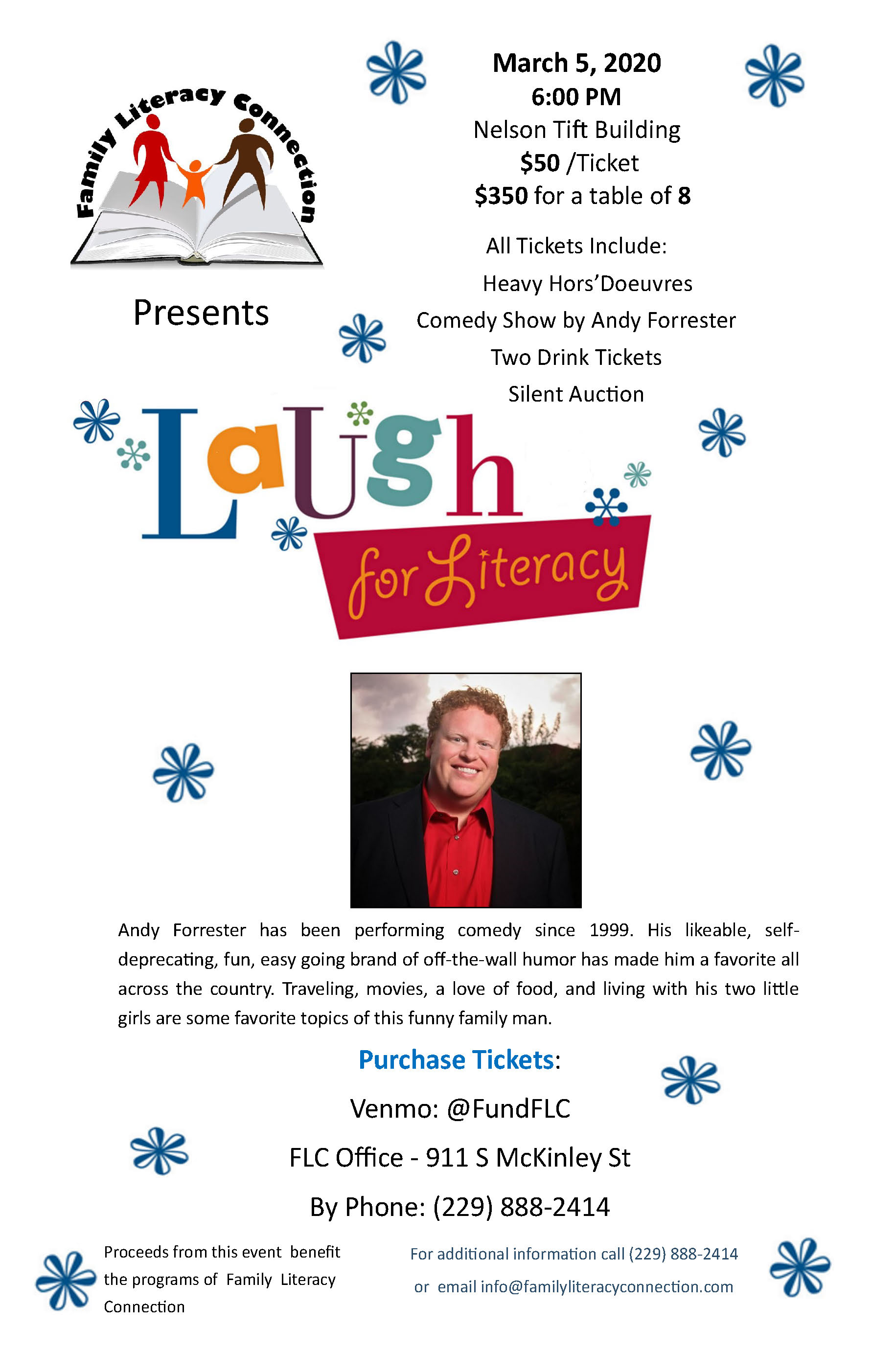 Join us March 5th for our Annual Laugh for Literacy Fundraiser and Silent Auction! The night will be filled with laughter from Comedian Andy Forrester. Doors open at 6:00pm! Tickets are $50 or $350 for a table of 8 and include heavy hors d'oeuvres, comedy show, two drink tickets and a silent auction. Go > 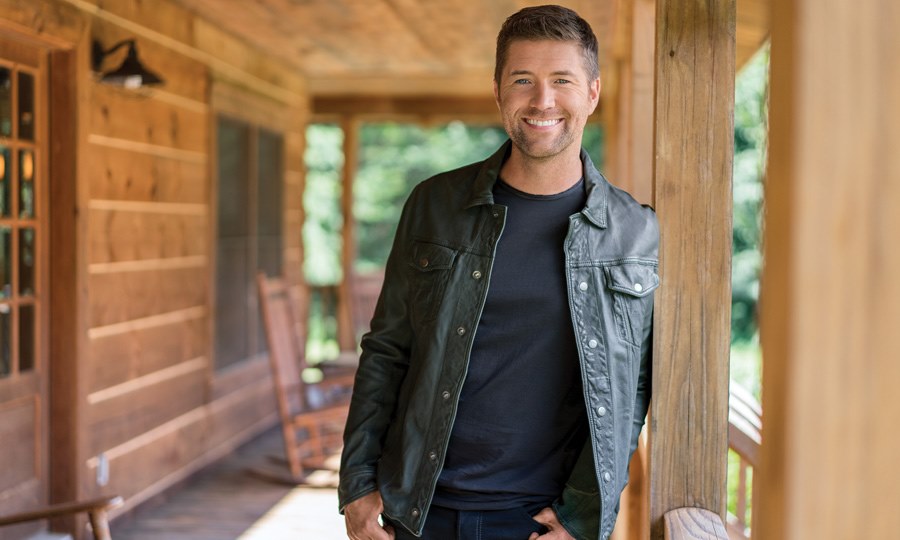 Tickets On Sale NOW! Big Spring Entertainment is excited to present country and gospel music singer Josh Turner live in concert on Thursday, March 5 in Albany, GA at Albany Municipal Auditorium. With his rich, deep voice and distinctive style, MCA Nashville recording artist Josh Turner is one of country music’s most recognizable hit-makers. From his 2003 Platinum-selling debut Long Black Train to his 2017 Billboard No. 1 release, Deep South, Turner has scored multiple GRAMMY®, CMA and ACM Awards nominations and received six Inspirational Country Music Awards. As one of the youngest members inducted into the Grand Ole Opry, Turner has sold more than 8 million units, topped more than 1.5 billion in global streaming and populated radio with such memorable hits as “Hometown Girl,” “Would You Go With Me,” “Your Man,” “Time Is Love,” “Why Don’t We Just Dance” and “Long Black Train.” Go > 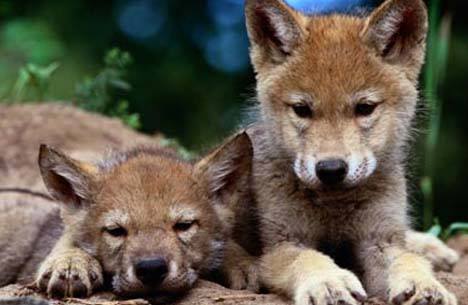 Cubs Programs are specifically targeted for children ages 3 and 4. Join us in the Zoo with your little one from 9:30 a.m.-10:45 a.m. Cubs Programs are free with Zoo admission, and as always, free for members. Go > 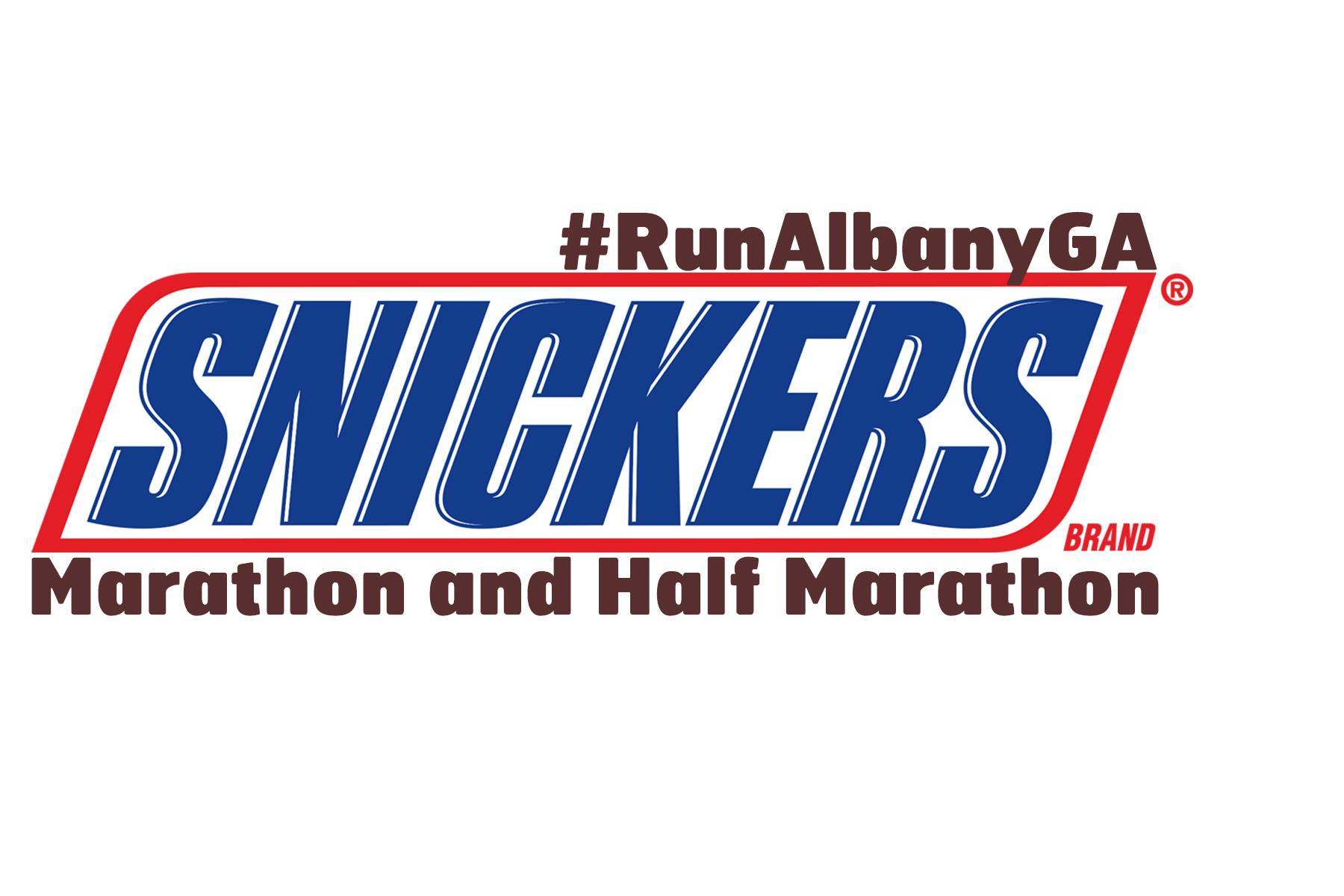 Snickers Marathon and Half Marathon

Qualify for Boston, by joining us for the Annual SNICKERS(R) Marathon and Half Marathon! Runners are treated to a flat, fast and friendly course with a Southern Hospitality experience. Albany Marathon, Inc. strives to be the "Best Small Town Race in America". Come race with us where every personal touch can be expected! Go > 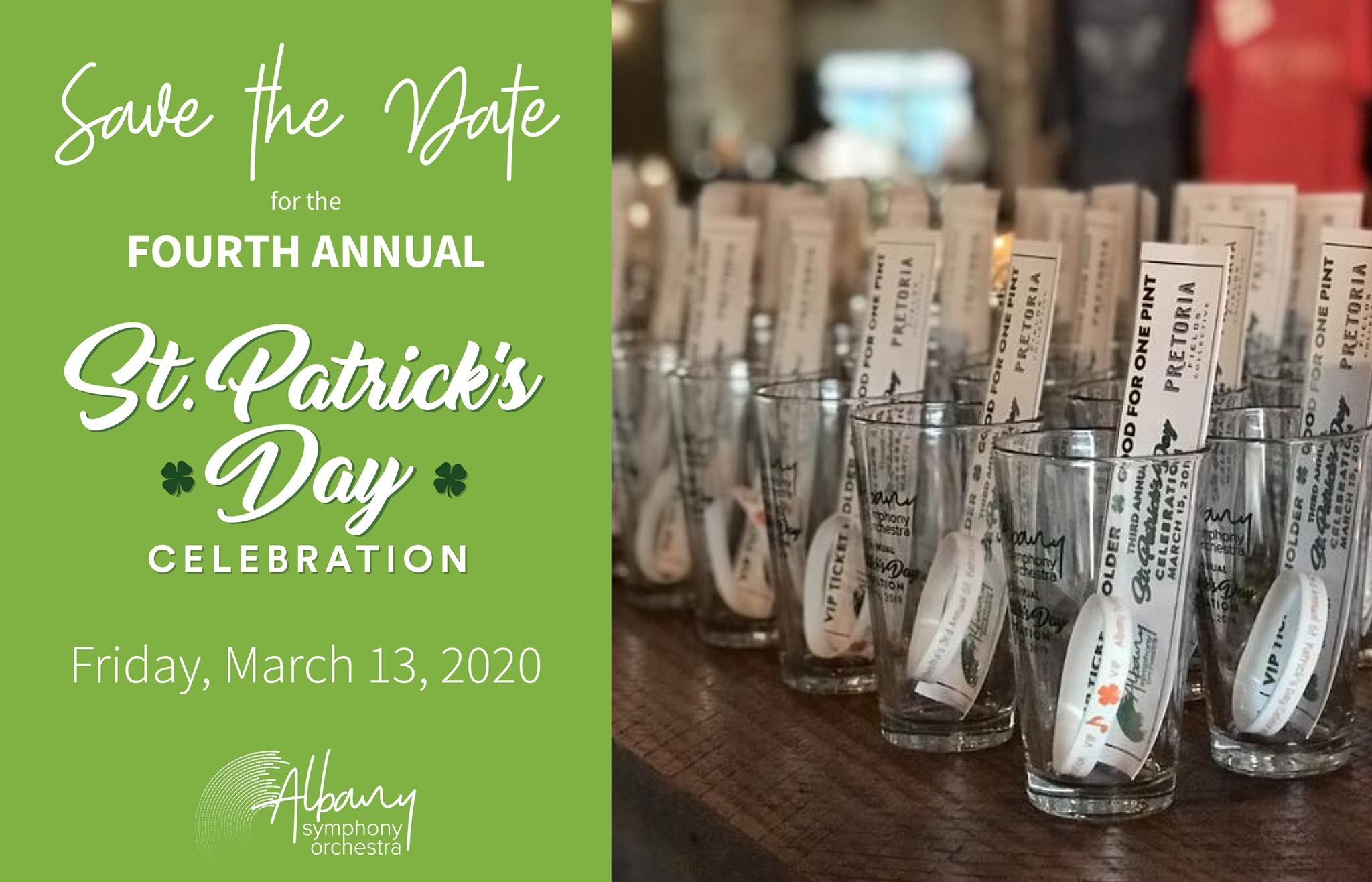 Save the Date for this one-of-a-kind St. Patrick's Day event! Go > 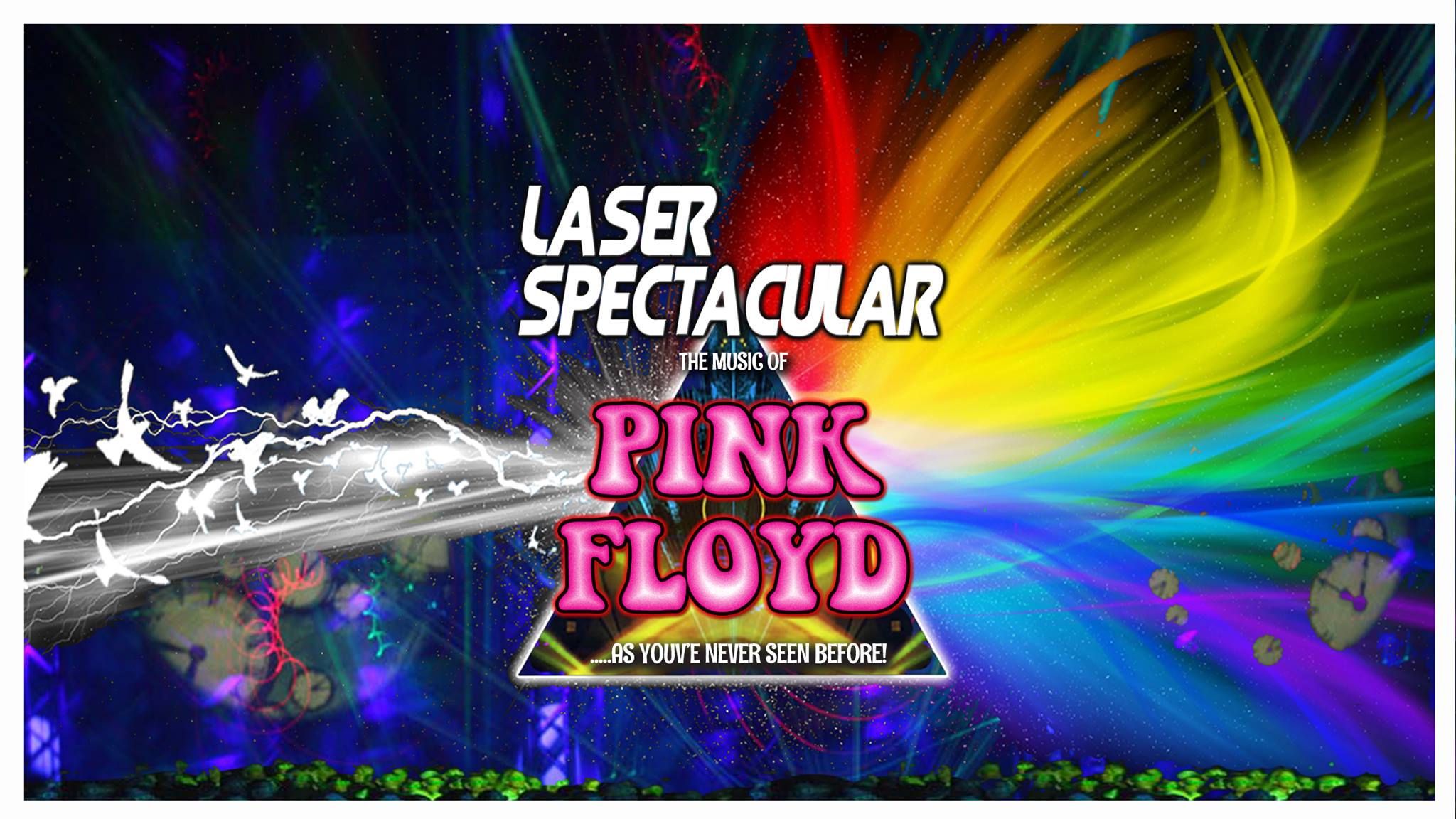 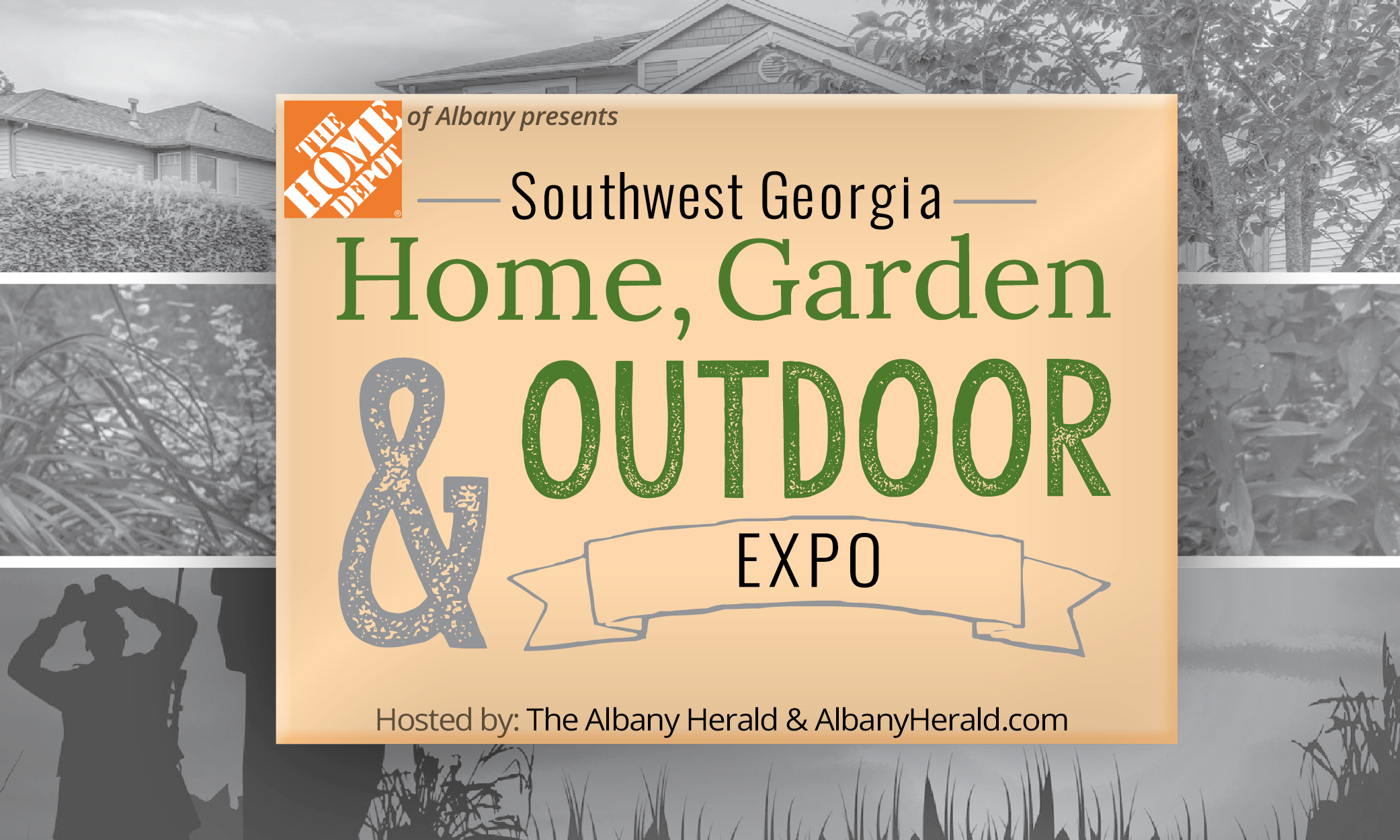 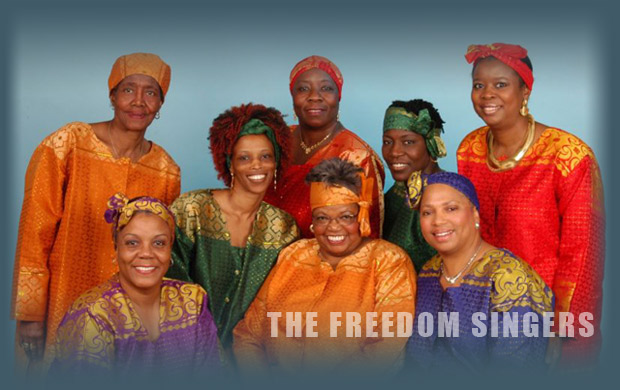 Songs as Inspiration: The Freedom Singers 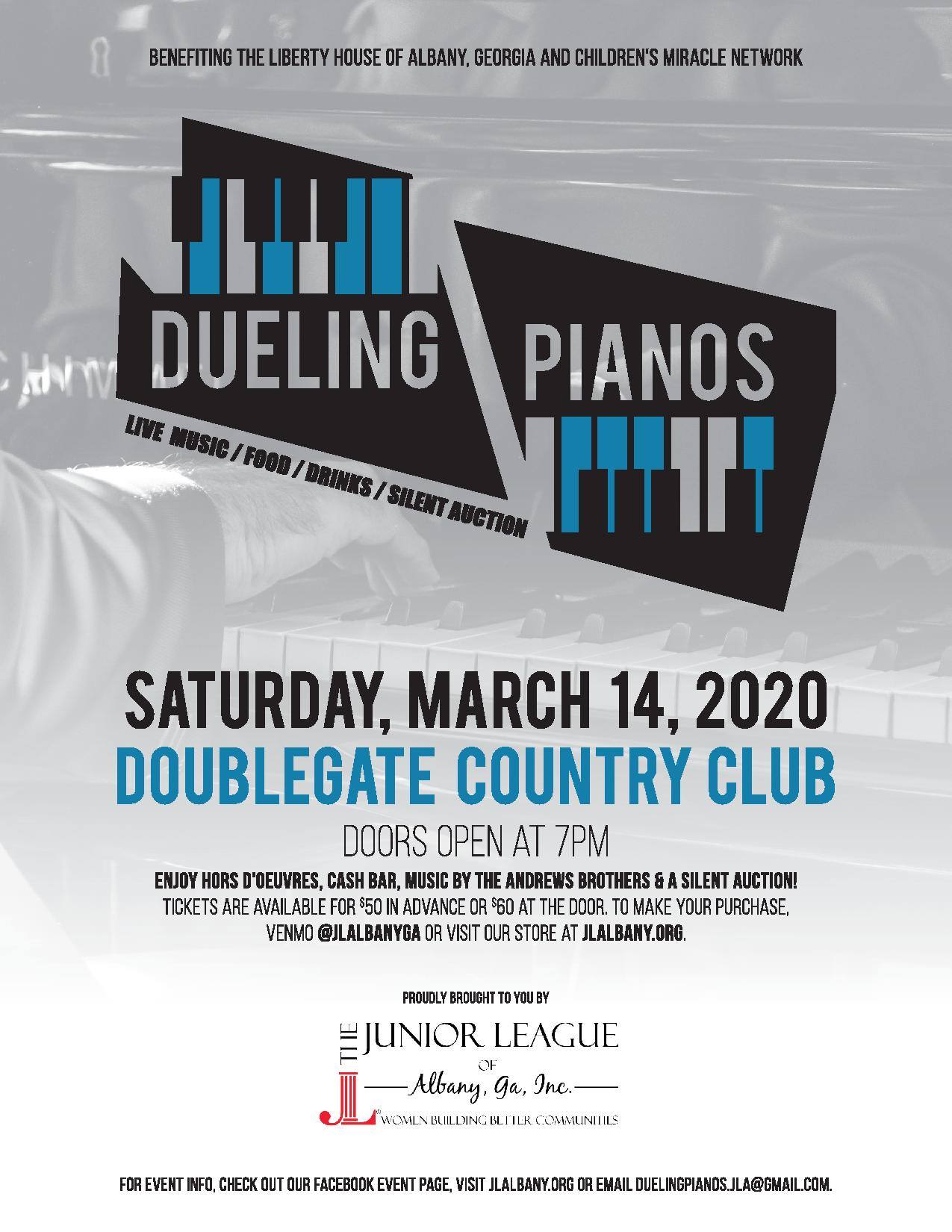 Enjoy hors d'oeuvres, cash bar, music by Andrew Brothers & a silent auction! Tickets are available for $50 in advance or $60 at the door. To make your purchase venmo @JLAlbanyGA or visit our store at http://www.jlalbany.org/store. All proceeds benefit the Liberty House of Albany, GA and Children's Miracle Network. Go >

First Robotics is a competition where high school teams perform challenges with robots they have built themselves. Come watch the robots compete! The theme this year is Infinite Recharge. This is a FREE event lasting March 27-28 and for all ages! Go > 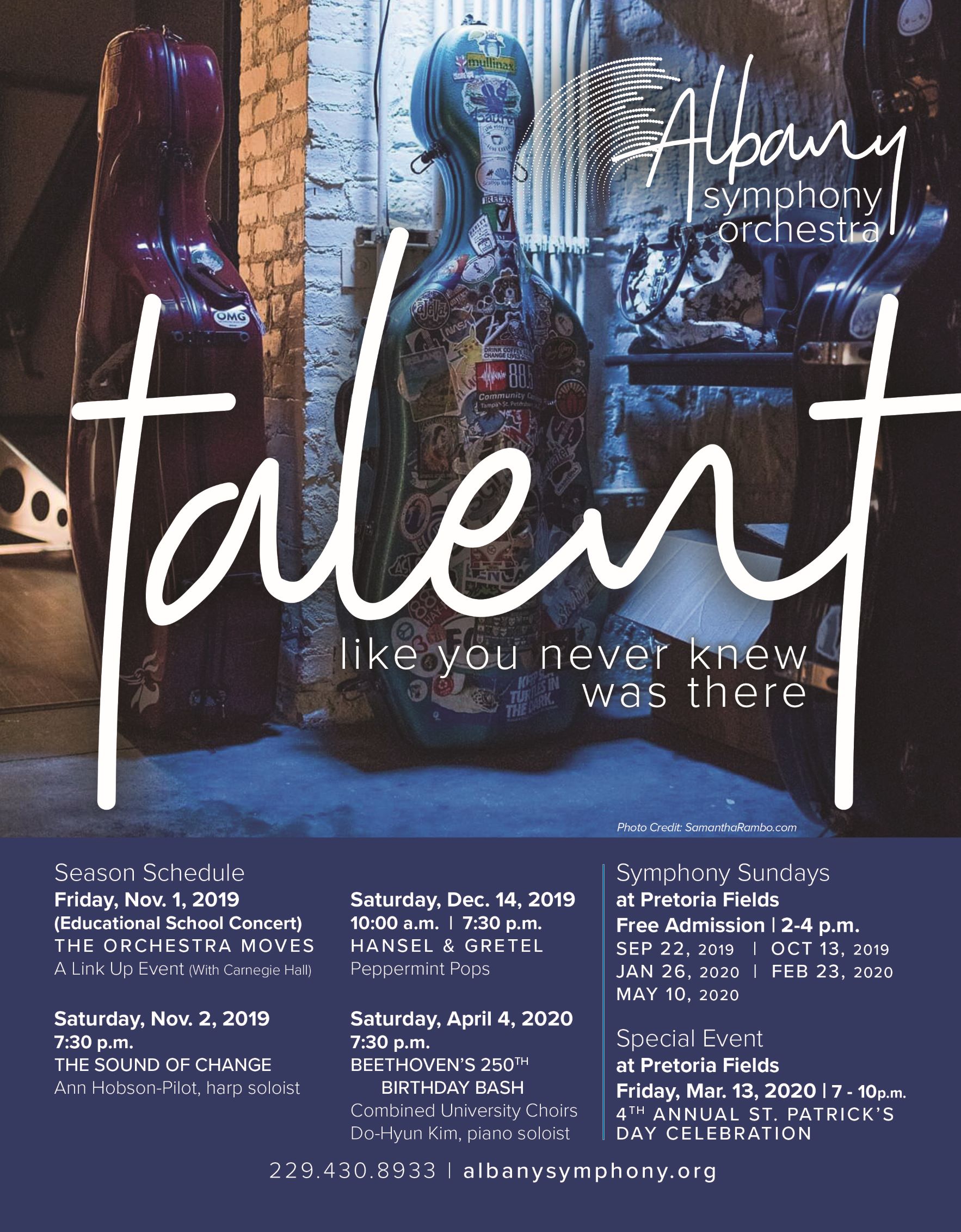 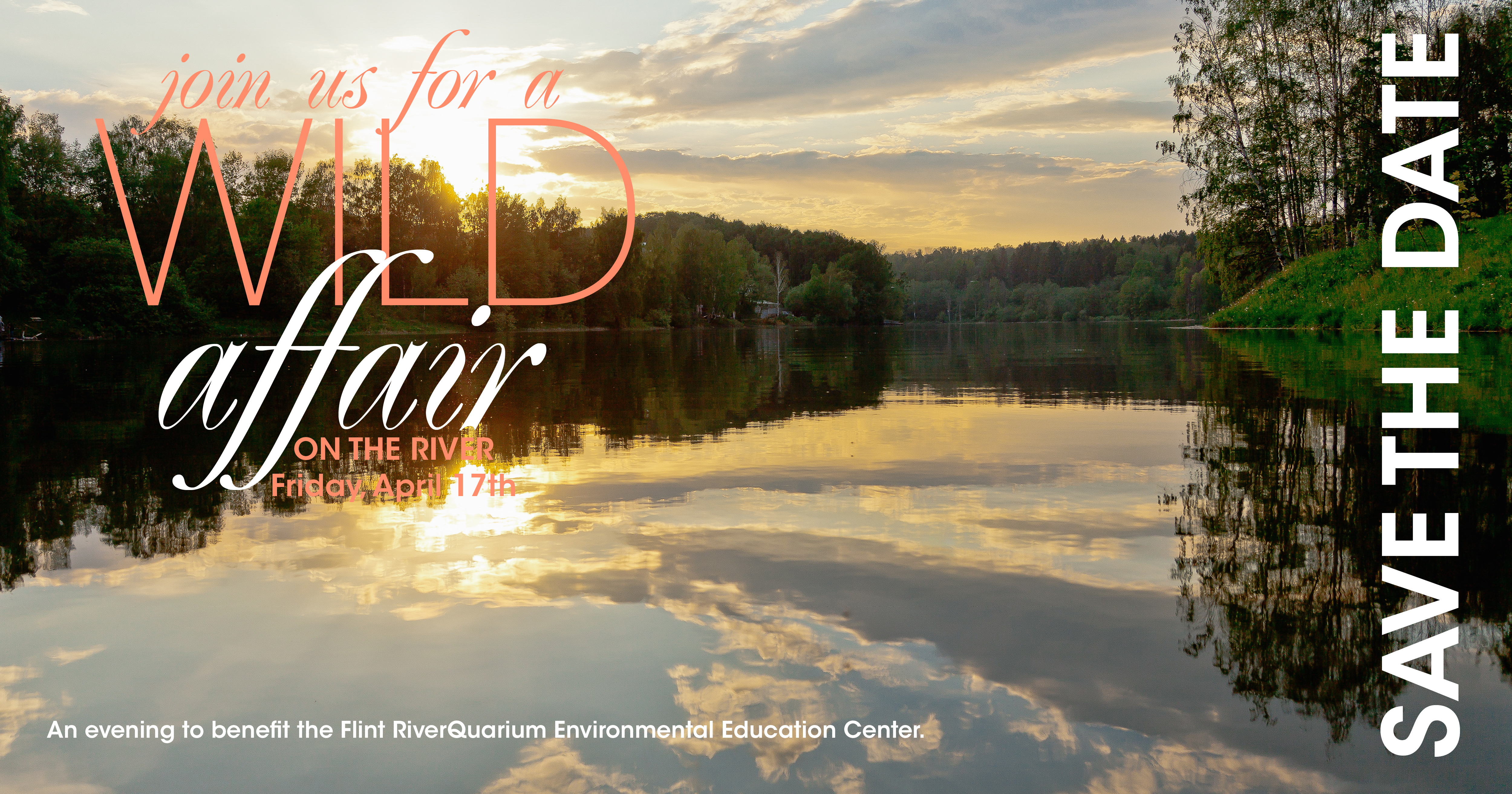 Save the date for the Flint RiverQuarium's signature event, A Wild Affair! This year, we're back on the banks of the beautiful Flint River on Friday, April 17--you won't want to miss it! Go > 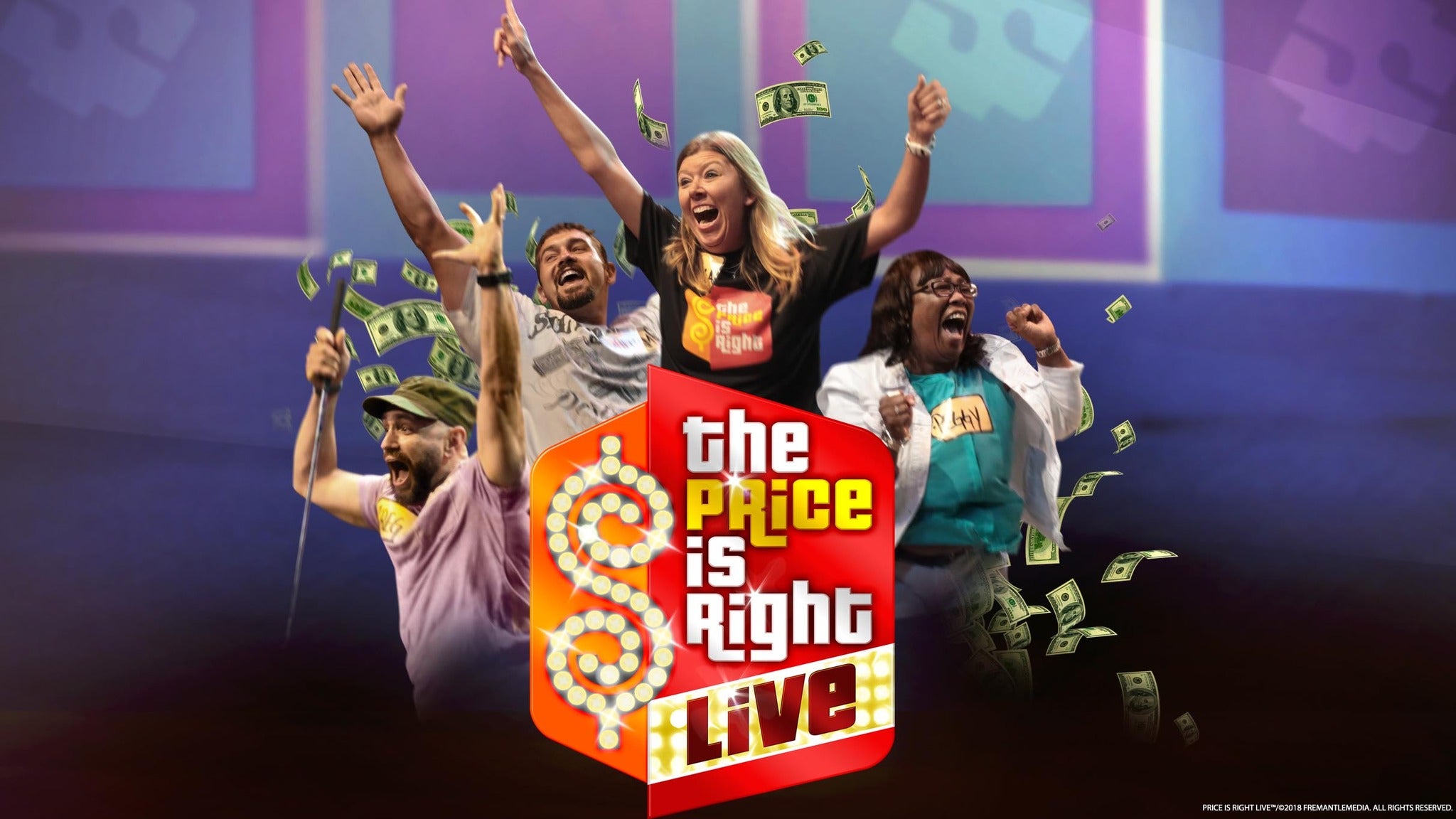 The Price is Right Live! 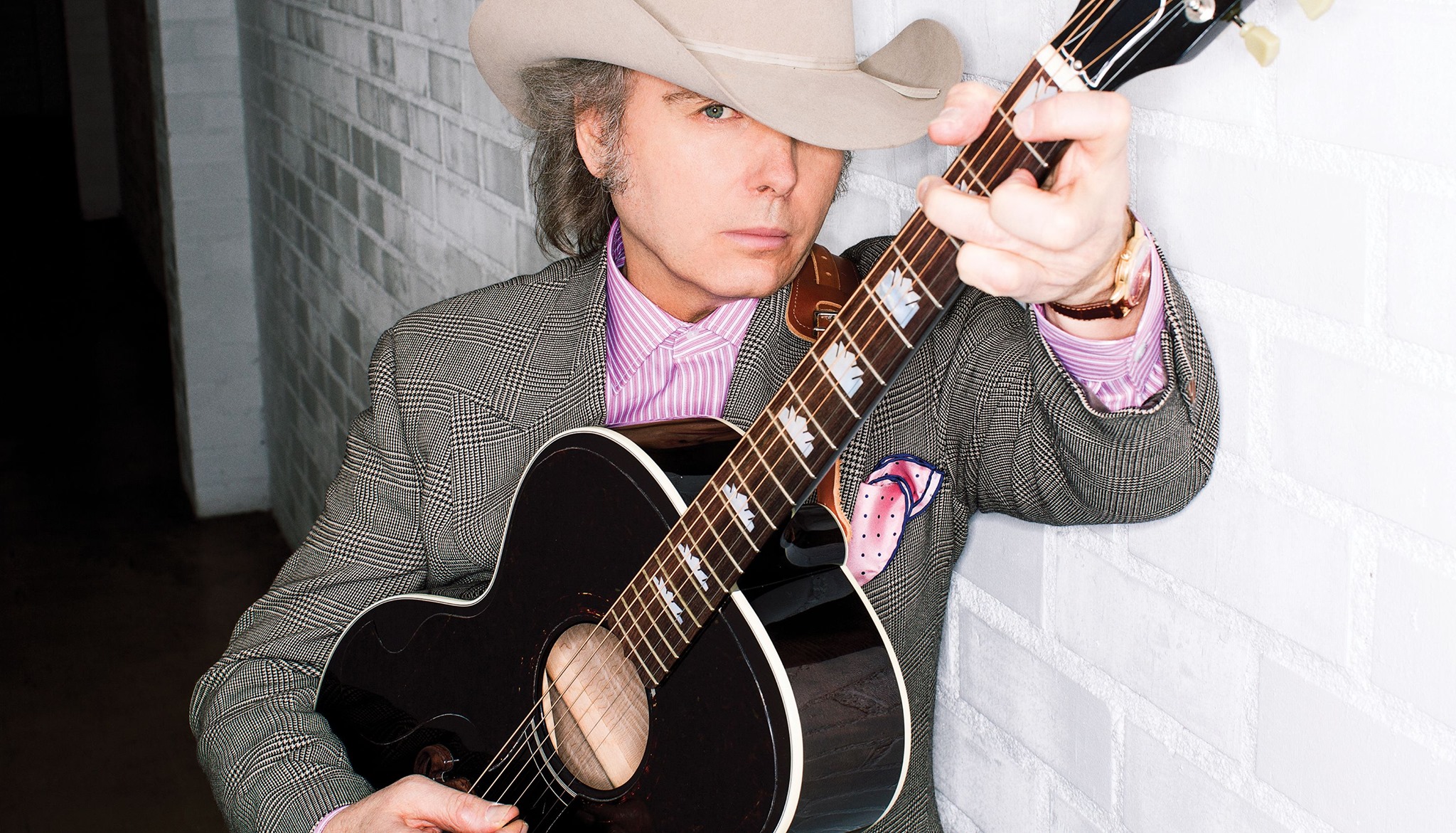 Dwight Yoakam is officially coming to the Good Life City! Tickets go on sale January 10th at 10AM. Go >